Vascular and Interventional Radiology is unique among the subspecialties of Radiology in a sense that it does not end at imaging or diagnosis, it carries a dimension of therapy. From this perspective, our research is focused on exploring innovative concepts, approaches, technologies, methods, techniques, and drugs, with an aim to develop safe and effective treatments for diseases and to provide sound solution for clinical problems, using non-surgical interventions, in a minimally-invasive way. Our research interest has been focused on the treatment of hepatocellular carcinoma, the treatment cerebrovascular diseases, the treatment of aortic diseases, gynecological diseases and urological diseases, as well as the development of navigational systems for interventional procedures, and the application of artificial intelligence in the assessment of clinical outcome of vascular diseases.

MATERIALS AND METHODS: This was a prospective phase I non-randomized study conducted between March 2013 and October 2016 in accordance to the Declaration of Helsinki and Declaration Good Clinical Practice with written informed consent. There were 36 males and 8 females, of median age (interquartile range) 64 (58,74) years and 74.5 (70 ,80) years respectively. The primary endpoints were treatment safety and tumor response. The secondary endpoints were time to progression (TTP), progression free survival (PFS), conversion to partial hepatectomy, and viable HCC within the tumor specimen. The study endpoints of the study group (n=22) were compared to those of a case-matched control group (n=22) of patients who received conventional cTACE during the same period using a Pearson Chi-square test.

RESULTS: ACE was successfully completed in all cases without complication. The complete response rates by patient or by tumor were both 100%. The median TTP and median PFS were significantly longer in the study group (both were 28 months versus 10 months, P<0.001). The number of patient conversions to hepatectomy was 7 for ACE and 3 for cTACE. Viable tumor was found in 2/8 (ACE) and 3/3 (cTACE) of tumor specimens.

CONCLUSIONS: ACE is a feasible, safe, and well-tolerated treatment for patients with HCC, which is highly effective and may be more effective than cTACE in achieving complete response. 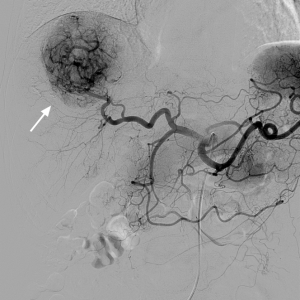 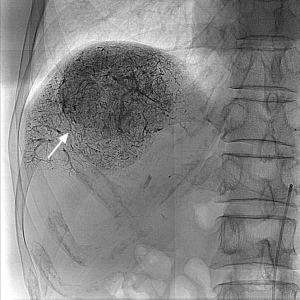 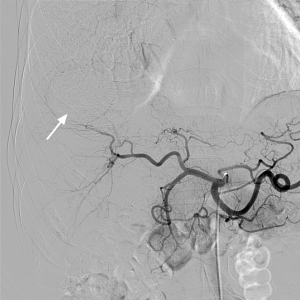 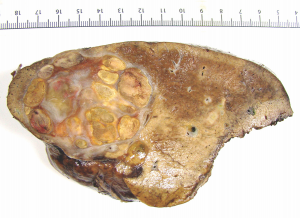 A high-intensity-focused-ultrasound (HIFU) treatment for uterine fibroids using a modified energy transmission protocol and oxytocin augmentation is being proposed, to aim for an effective and well-tolerable treatment to be given as an out-patient procedure without anesthesia or sedation. The objective of this study was to evaluate the safety and treatment effectiveness of this new protocol. The treatment outcomes of 9 consecutive patients (study group) were compared to those of 51 patients (control group) who had been randomized (1:1) to receive HIFU (n=24) or uterine artery embolization (UAE) (n=27). There was no major adverse event. At 3 months, the median proportion of fibroid volume as compared to baseline was 51.1% in the study group, significantly smaller than that in the control groups (HIFU 76.6%, UAE 66.2%). At 6 months, all patients in the study group became symptom free (9/9, 100%), a result significantly better than that of both control groups; the proportion of patients with good quality of life was significantly higher in the study group (5/7, 71.4%) as compared to the control groups (HIFU 3/24, 12.5%; UAE 7/27, 25.9%). Within 24 months, no one in the study HIFU group required re-intervention, a result significantly better than that in the control HIFU group (15/24, 62.5%). The treatment could result in very promising long-term imaging and clinical outcome that may be better than those of uterine artery embolization, a randomized control trial of larger scale is required for further evaluation of this treatment. 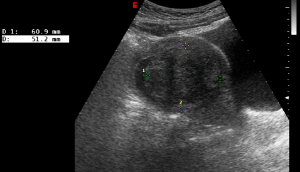 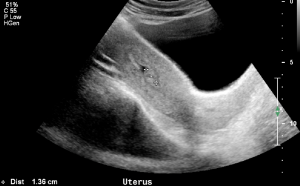 PURPOSE: To evaluate the presence of intravesical prostatic protrusion (IPP) and its thickness-to-height ratio (T/H ratio) as a predictor for the clinical outcome and morbidity of prostate artery embolization (PAE) for benign prostatic hypertrophy (BPH).

MATERIALS AND METHODS: This was a prospective, single-center, institutional review board approved study from June 2015 to December 2018, of 82 consecutive patients (aged 53 to 79, median 66 years) with International Prostate Symptom Score (IPSS) ≥15, and Quality of Life score (QOL) ≥3. The presence of IPP and its T/H ratio were assessed on baseline MRI for their correlation with the clinical outcomes of suboptimal IPSS (IPSS ≥10) and suboptimal QOL (QOL ≥3) up to 12 months post-PAE, and the occurrence of post-procedure complications (≤30 days) which caused a certain degree of urinary outflow obstruction. 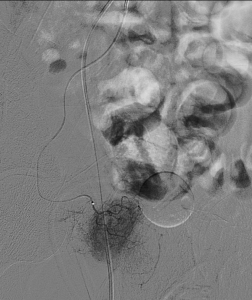 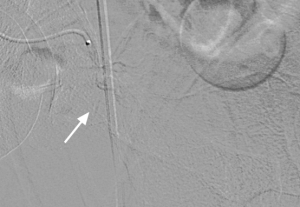 Absence of prostate vascularity after embolization 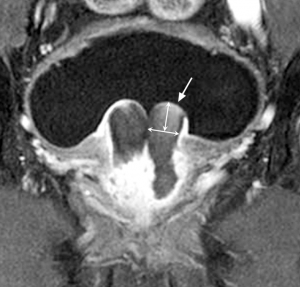 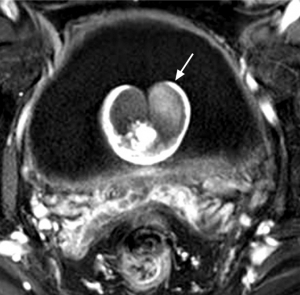 BACKGROUND AND PURPOSE: A non-invasive investigation with high spatial resolution and without metal artifacts is necessary for long term imaging follow-up following flow-diverter implantation. We aimed to evaluate the diagnostic value of cone-beam CT angiography with intravenous contrast enhancement (IVCBCTA) in the assessment of vascular status following implantation of Pipeline embolization device (PED), and to analyze the preliminary results of vascular status following long-term PED implantation.

MATERIALS AND METHODS: This was an on-going prospective study approved by Institutional-Review-Board. Consecutive and consented patients with intracranial aneurysms treated with PED were included. Patients with modified Rankin scale score 4 to 5 were excluded. Median and interquartile range of PED to IVCBCTA time interval was 56.6 months and 42.9 to 62.4 months respectively. IVCBCTA was performed with the patient fully conscious, using C-arm CT with flat-panel detector.

RESULTS: There were 31 patients and 34 vascular segments. In all 34 cases, contrast effect and image quality was good and indistinguishable from that of intraarterial CBCTA. Metal artifact occurred in all 14 cases with coil mass, PED was obscured in 3 cases. In all 31 cases, there was no residual aneurysm, no vascular occlusion, one vascular stenosis (50%), good PED apposition to vessel, and no PED-induced calcification. All 28 PED-covered side branches were patent and not narrowed.

CONCLUSIONS: IVCBCTA is potentially promising and useful for effective evaluation of the vascular status following intracranial flow-diverters, PED for intracranial aneurysms is probably safe and promising for long-term placement, with favorable morphological outcome and without delayed complications. 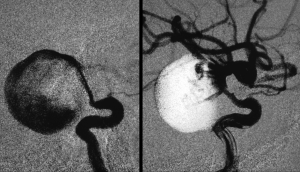 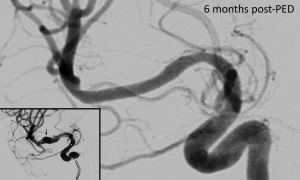 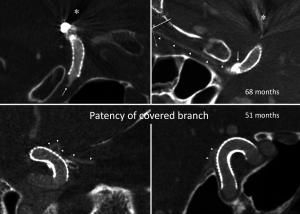 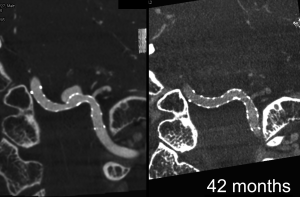 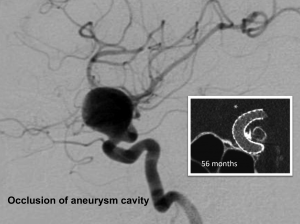