Adolescent Idiopathic Scoliosis (AIS), or curvature of the spine, affects around 4% of the population worldwide. It most commonly affects adolescent girls, with an onset between the ages of 10 and 16. Previous medical theory suggested that AIS only affected the spine and the vertebrae that make it up. With advanced magnetic resonance imaging, the condition is also found to involve the brain, the semi-circular canals of the ear, and the spinal cord.

The spinal deformity associated with AIS is simply the most visible symptom of the disease. There are also numerous “hidden” features within the central nervous system that have yet to be fully explored. Findings from our research have given us a better understanding of the relevance of anatomical and functional changes in the central nervous system and their relationship to the etiopathogenesis of AIS and progression of the spinal deformity. MR Morphometric studies of AIS could provide a new objective assessment for predicting the curve progression of AIS and the possibilities of future integrative treatment and rehabilitation in modulating curve progression clinically.

Our institute has installed the first low-dose bi-planar x-ray device (EOS system, France) in Hong Kong since 2015, which is able to capture the spine of the patients in two perpendicular planes. The two x-ray images can be reconstructed into a 3D full spinal model with very low dose of radiation exposure compared to the 3D spine images generated from CT. With the EOS system, AIS patients undergo bi-planar x-ray for their routine follow-up. The large amount of follow-up bi-planar x-ray data provides an opportunity of making a prediction model for AIS spinal curve.

As one of the only two referral hospitals in Hong Kong for patients with AIS, about 800 new cases and 3000 follow up cases would be taken care of per year. With such a large cohort, this valuable database allows us to carry out research studies for great impacts to enhance the current understanding of AIS.

Application of Advanced Imaging Technique in Obesity and Liver Imaging

Our department is actively applying advanced MR water-fat and T2* imaging, MR spectroscopy and Ultrasound Elastography in assessment of central obesity in both children and adults. The assessment includes abdominal adiposity, brown fat and white fat distribution, ectopic fat in liver and pancreas.

Imaging of Paediatric Oncology and Haematological Diseases
Including Thalassaemia

Prince of Wales Hospital, being the largest pediatric oncology center in Hong Kong, our Department has many radiology publications related to pediatric oncology patients. There are also recent publications related to assessment of organ iron load in thalassemia patients. CUHK is the first center in Hong Kong offering quantitative measurement of cardiac iron.

Our department has conducted ultrasound research in children and is the first group establishing the dynamic imaging protocol for urinary bladder and Color Doppler imaging of ureteric waveforms in children. An invited review paper has been published on the above topic in the Pediatric Radiology Journal.

During the outbreak of Severe Acute Respiratory Syndrome (SARS) in 2003, Prof Chu has collaborated with paediatrics centres in Toronto and Singapore and reported the chest radiograph pattern in a cohort of children suffered from SARS from different nations. This paper has been chosen as the prestigious Walter Berdon Award for the best Clinical Scientific paper in Paediatric Radiology in 2004. CUHK has conducted a multi-centre follow up of SARS children among five hospitals in our locality and co-ordinating high resolution CT imaging for this group of patients.

During the outbreak of renal complications related to melamine-tainted milk products, Prof Chu has collaborated with the pediatric department and published papers on this topic, including one article in the New England Journal of Medicine. We have obtained two external competitive grants on follow up studies.

This study allows objective measurement to evaluate efficacy of different treatments against obesity. 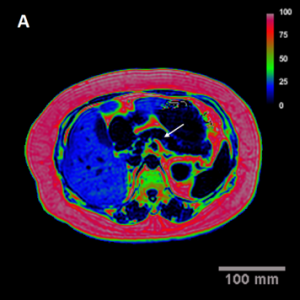 The objective of this study is to reconstruct the 3D lung model for the assessment of the whole spine and lung morphology. 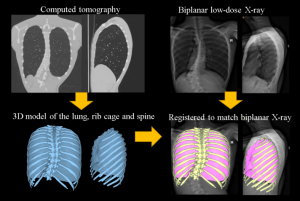 The aim of this study is to develop an extensive geometrical and mechanical phenotype characterizing AIS. 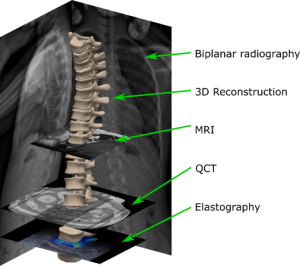 OBJECTIVES: To study the change in brown and white adipose tissue (BAT and WAT), as well as fat content in the liver and pancreas, in patients with morbid obesity before and after bariatric surgery.

CONCLUSIONS: The results of this study suggest that bariatric surgery effectively reduced weight, mainly as a result of the reduction of abdominal WAT. Liver and pancreatic fat were deceased below the threshold possibly due to the reduction of free fatty acid. BAT volume, fat-fraction and T2* showed no significant changes, probably because surgery itself might not have altered the metabolic profile of the patients. 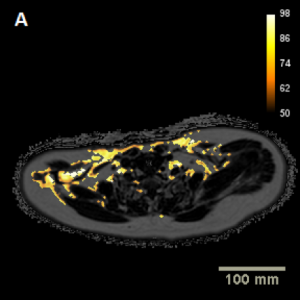 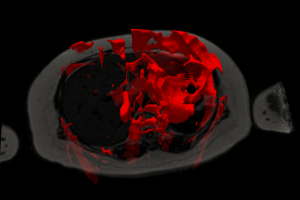 BACKGROUND: Research studies demonstrated pathologic lesions were unevenly distributed in patients with non-alcoholic fatty liver disease (NAFLD) and non-alcoholic steatohepatitis. As hepatic steatosis occurs prior to steatohepatitis and other late stage liver conditions, the distribution pattern of hepatic fat and iron concentration should be investigated to prevent sampling variability. The first purpose of this study was to perform comparison and validation of in-house hepatic fat measurements using water-fat MRI and MRS. The second objective was to quantify hepatic fat-fraction and T2* values in left and right liver lobes using water-fat MRI.

METHODS: Fifty-four non-alcoholic adults (27 NAFLD, age: 42.8 ± 11.8), 27 non-NAFLD, age: 45.5 ± 11.2) and 46 non-alcoholic teenagers (23 NAFLD (age: 15.4 ± 2.6), 23 non-NAFLD (age: 13.9 ± 2.3) were recruited. All participants underwent chemical shift water-fat MRI and 1H MRS at 3 T. Hepatic steatosis was defined by intrahepatic triglyceride more than the threshold of 5.56% using MRS (clinical reference) and non-alcoholic was defined by alcohol ingestion of no more than 30 g and 20 g per day for male and female respectively. Hepatic fat-fractions in left and right liver lobes were measured using regions-of-interest (ROIs) approach. Three ROIs were drawn on the fat-fraction images and duplicated on to the co-registered T2* images at the inferior right, superior right and superior left liver lobes. Comparison and validation of water-fat MRI and MRS were performed using intraclass correlation coefficient (ICC) and Bland-Altman plot. Hepatic fat-fraction and T2* measured from the ROIs were compared using repeated measures ANOVA. Independent t-test was used for between groups analysis. 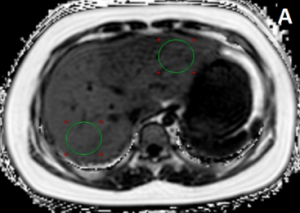 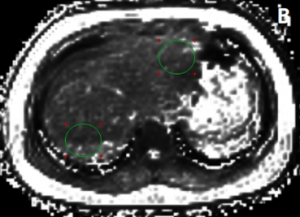 BACKGROUND: Neural system was one of the important contributors to the etiopathogenesis of adolescent idiopathic scoliosis; additionally, the morphology of corpus callosum interconnecting both hemispheres of the brain was found to be altered morphologically. Our aim was to evaluate and compare the microstructural changes of the corpus callosum and its interhemispheric white matter fiber tracts interconnecting both cerebral hemispheres in patients with adolescent idiopathic scoliosis and matched controls using diffusion tensor imaging.

MATERIALS AND METHODS: Brain DTI was performed in 69 patients with adolescent idiopathic scoliosis (female, right thoracic/thoracolumbar curve) and 40 age-matched controls without adolescent idiopathic scoliosis (female). 2D and 3D segmentation of the corpus callosum were performed using a region-growing method, and the corpus callosum was further divided into 6 regions, including the rostrum, genu, anterior and posterior midbodies, isthmus, and splenium. The laterality index was calculated to quantify the asymmetry of the corpus callosum. Interhemispheric fiber tractography were performed using the Brodmann atlas.

CONCLUSIONS: Reduced fractional anisotropy was found in the genu and splenium of the corpus callosum and corresponding interhemispheric fiber tracts interconnecting the somatosensory and visual cortices via the splenium. Our results are suggestive of altered white matter microstructure within the brain of those with adolescent idiopathic scoliosis, which could be related to abnormal brain maturation during adolescence in adolescent idiopathic scoliosis and could possibly explain the previously documented somatosensory function impairment and visuo-oculomotor dysfunction in this condition. 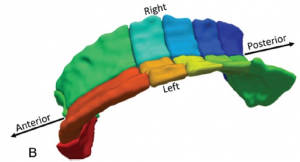 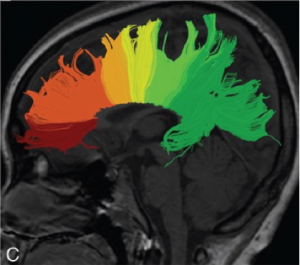 Variation in anisotropy and diffusivity along the medulla oblongata and the whole spinal cord in adolescent idiopathic scoliosis: a pilot study using diffusion tensor imaging.

BACKGROUND: Disturbed somatosensory evoked potentials have been demonstrated in patients with adolescent idiopathic scoliosis (but this functional delay was found to originate above the C5-6 level, while the lower cord level was unaffected). Together with MR imaging observation of tonsillar ectopia and a relatively tethered cord, we hypothesized that there is disturbed mean diffusivity integrity along the spinal cord. In this study, advanced DTI was used to evaluate whether there was underlying decreased WM integrity within the brain stem and spinal cord in adolescent idiopathic scoliosis and any relationship to cerebellar tonsillar ectopia. Clinical impact on balance testing was also correlated.

MATERIALS AND METHODS: Thirteen girls with adolescent idiopathic scoliosis with right thoracic curves were compared with 13 age-matched healthy girls. DTI of the brain and whole spinal cord was performed. ROIs were manually defined for the medulla oblongata and along each intervertebral segment of the cord. Mean values of fractional anisotropy and mean diffusivity were computed at the defined regions. Between-group comparisons were performed by 1-way ANOVA.

RESULTS: Significantly decreased fractional anisotropy values and increased mean diffusivity values were found at the medulla oblongata and C1-2, C2-3, C3-4, and C4-5 segments in patients with adolescent idiopathic scoliosis compared with healthy subjects. No significant difference was found in the lower cord levels. Significant correlation was found between the tonsillar level and fractional anisotropy value at the C4-5 level in patients with adolescent idiopathic scoliosis only.

CONCLUSIONS: The findings from this study are in agreement with previous findings showing abnormal somatosensory evoked potential readings occurring only above the C5-6 level in patients with adolescent idiopathic scoliosis; these findings might partially explain the pathophysiology of the neural pathway involved.

REFERENCE: Variation in anisotropy and diffusivity along the medulla oblongata and the whole spinal cord in adolescent idiopathic scoliosis: a pilot study using diffusion tensor imaging. American Journal of Neuroradiology 2014;35(8):1621-1627