Musculoskeletal imaging focuses on the diagnostic imaging and treatment of diseases involving the joints, bones, muscles and spine. This includes imaging of arthritis, sports injuries, bone and soft tissue tumours, and muscular disorders. Our Department has been at the forefront of musculoskeletal imaging in Asia, and was the first to show a method for measuring glenoid bone loss in recurrent dislocation, which is now routinely used in radiology departments worldwide. We are one of the globally leading groups in osteoporotic vertebral fracture assessment. We are an active partner of MsOS (Hong Kong) and MrOS (Hong Kong) studies, which represents the first large-scale prospective cohort study ever conducted on bone health in Asian women. We confirmed that the spine osteoporotic fracture prevalence in elderly females is the same in Chinese, Korean, Japanese, Latin American, and slightly lower than white Caucasians. We confirmed that within the same mild/moderate vertebral grades, compared with the subjects without endplate/cortex fracture, subjects with endplate/cortex fracture are associated with a higher future risk of vertebral fracture. We have also showed that menopause accelerates disc degeneration in females. We established the prevalence and progression rate of spondylolisthesis in elderly Chinese men and women.

Establishing a link between impaired bone perfusion in osteoporosis and impaired cerebral perfusion (i.e. cerebrovascular disease) would be a significant step in (a) understanding the pathophysiology of both these common diseases and (b) the development of a single therapy to help both conditions. 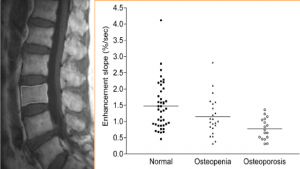 To prospectively evaluate the accuracy of ultrasound in characterizing superficial soft tissue tumors. 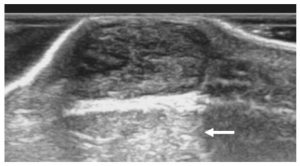 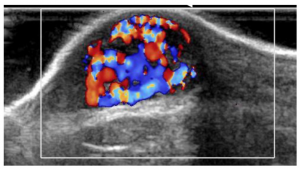 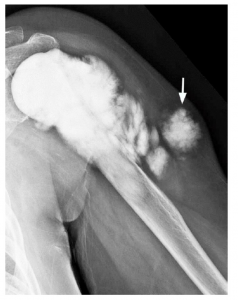 RESULTS: Of subjects with Genant’s grades 0, − 1, − 2, and − 3 VD, at follow-up, 4.6%, 8%, 10.6%, and 28.9% had at least one VD progression or new incident VD respectively. Among the three ecf0 groups, there was no difference in VD progression or new VD; while there was a significant difference in new ecf incidence, with vd0/ecf0 being lowest and vd2m/ecf0 being highest. Vd1/ ecf0 and vd2m/ecf0 vertebrae had a higher risk of turning to ecf1 than vd0/ecf0 vertebrae. If vd1/ecf0 and vd2m/ecf0 subjects were combined together (range 20–34% height loss) to compare with vd1/ecf1 and vd2m/ecf1 subjects, the latter had significantly higher VD progression and new VD rates.

Prevalence of cervical spine degenerative changes in elderly population and its weak association with aging, neck pain, and osteoporosis

BACKGROUND: To investigate the prevalence of MRI degenerative findings of cervical spine in elderly Chinese males and females.

METHODS: From a general population sample, cervical spine T2 weighted sagittal MR images were acquired in 272 males (mean age: 82.9±3.83) and 150 females (mean age: 81.5±4.27). Images were interpreted and degenerative changes were classified. Study subjects were divided into younger group (group A, ≤ 81 years) and older group (group B, >81 years). For neck pain, question was structured as ‘during the past 12 months, have you had any neck pain?’. Two hundred and fifty-two males and 134 females also had hip bone mineral density (BMD) measured. 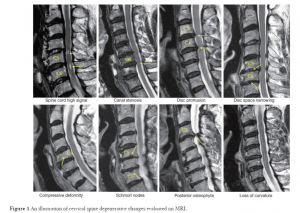 MATERIALS AND METHODS: This study had institutional review board approval, and all participants provided informed consent. DXA, 1H MR spectroscopy, and dynamic contrast-enhanced MR imaging of the lumbar spine were performed in 90 men (mean age, 73 years; range, 67–101 years). Vertebral marrow fat content and perfusion (maximum enhancement and enhancement slope) were compared for subject groups with differing bone densities (normal, osteopenic, and osteoporotic). The t test was used for comparisons between groups, and the Pearson test was used to determine correlation between marrow fat content and perfusion indexes. 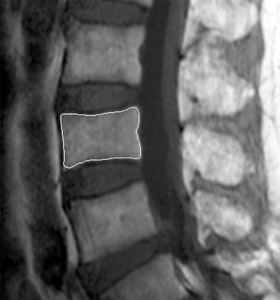 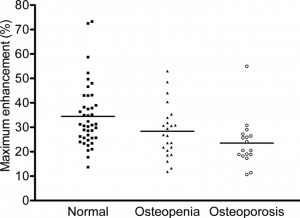 PURPOSE: To prospectively evaluate accuracy of sonography for diagnosis of carpal tunnel syndrome (CTS) in patients clinically suspected of having the disease in one or both hands.

MATERIALS AND METHODS: A prospective cohort of 133 patients suspected of having CTS were referred to a teaching hospital between October 2001 and June 2002 for electrodiagnostic study. One hundred twenty patients (98 women, 22 men; mean age, 49 years; range, 19–83 years) underwent sonography within 1 week after electrodiagnostic study. Radiologist was blinded to electrodiagnostic study results. Seventy-five patients had bilateral symptoms; 23 patients, right-hand symptoms; and 22 patients, left-hand symptoms (total, 195 symptomatic hands). Cross-sectional area of median nerve was measured at three levels: immediately proximal to carpal tunnel inlet, at carpal tunnel inlet, and at carpal tunnel outlet. Flexor retinaculum was used as a landmark to margins of carpal tunnel. Optimal threshold levels (determined with classification and regression tree analysis) for areas proximal to and at tunnel inlet and at tunnel outlet were used to discriminate between patients with and patients without disease. Sensitivity, specificity, and false-positive and false-negative rates were derived on the basis of final diagnosis, which was determined with clinical history and electrodiagnostic study results as reference standard.

CONCLUSIONS: Sonography is comparable to electrodiagnostic study in diagnosis of CTS and should be considered as initial test of choice for patients suspected of having CTS. 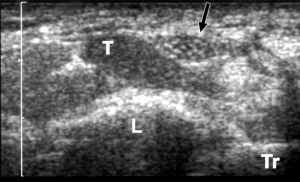 DISCRIMINATORY SONOGRAPHIC CRITERIA FOR THE DIAGNOSIS OF CARPAL TUNNEL SYNDROME.

OBJECTIVES: Sonographic examination of the median nerve has been suggested as a useful alternative to electrophysiologic study in the diagnosis of carpal tunnel syndrome. To determine its usefulness and the best diagnostic criterion, sonograms of patients with the disease were compared with sonograms of healthy subjects in a case–control study.

METHODS: Patients with carpal tunnel syndrome and asymptomatic controls who were matched for age and sex were enrolled and underwent sonography of the wrists. Eight separate sonographic criteria were analyzed in each wrist. Data from the patient group and the control group were compared to establish optimal diagnostic criteria for carpal tunnel syndrome, using receiver operating characteristic analytic techniques.

CONCLUSIONS: Sonographic measurement of the median nerve cross‐sectional area is both sensitive and specific for the diagnosis of carpal tunnel syndrome. 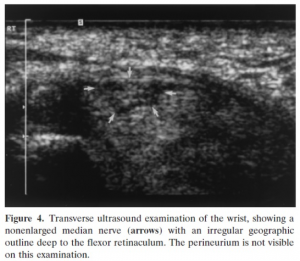 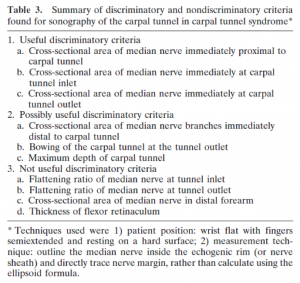