MRI in Head and Neck Cancers

Head & neck cancer is a leading cause of cancer worldwide. For the past 20 years, our group has been researching the role of MRI in cancer detection, prognostication, treatment planning and follow-up. We are a pioneering centre in functional MRI for head & neck cancer and are at the forefront of developing and evaluating DWI, MRS, DCE-MRI and CEST for tumour detection, characterisation and prediction as well as monitoring treatment response.

We have a special interest in nasopharyngeal carcinoma (NPC). Our group was among the first to document the MRI patterns of primary and nodal spread of this cancer, to compare MRI and FDG-PET, and to report a range of treatment-induced complications. In our current research, we include MRI for early NPC detection. Using our MRI grading system, we have shown that MRI detects the 10% of cancers that are endoscopically occult. We have also used MRI to detect early stage NPC in collaborative plasma EBV-DNA population screening studies performed by the world-renowned Department of Chemical Pathology at CUHK and international organisations.

Our specialist H&N ultrasound service and research was started in the early ‘90s, and our team remains responsible today for all neck ultrasound and guided biopsies in the neck. In addition to greyscale & Doppler ultrasound, our research in H&N ultrasound extends to computational analysis of intra-nodal Doppler vascularity, using algorithms to differentiate benign from malignant disease; sonoelastography of thyroid, salivary gland masses, lymph nodes and neck masses to evaluate their nature; and the swallowing mechanism following treatment for Head & Neck cancer, using ultrasound & video fluoroscopy. This pioneering work has resulted in multiple research articles, competitive grants, and invitations to deliver lectures and hands-on workshops at major international meetings

Objectives: MRI can detect early-stage nasopharyngeal carcinoma (NPC), but the detection is more challenging in the plasma Epstein-Barr virus (EBV) DNA screening setting because early-stage NPCs must be distinguished from benign hyperplasia in the nasopharynx. This study aimed to determine whether diffusion-weighted imaging (DWI) MRI could distinguish between these two entities. 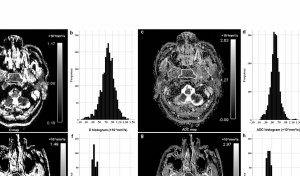 The objective of this study is to examine whether pre-treatment APT values of undifferentiated nasopharyngeal carcinoma primary tumour is able to predict the outcomes in two years follow-up time.

The objective of this study is to determine if treatment of nasopharyngeal carcinoma (NPC) induces early changes in amide proton transfer-weighted (APTw) magnetic resonance imaging (MRI), and to perform a preliminary evaluation of APTw imaging in response assessment. 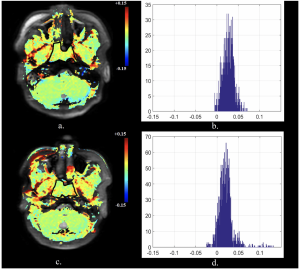 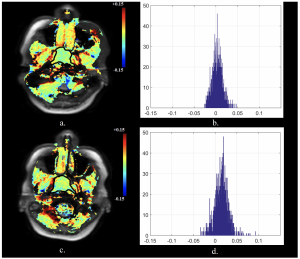 OBJECTIVES: To evaluate the utility of amide proton transfer (APT) imaging in the characterization of head and neck tumors

CONCLUSIONS: These preliminary data demonstrate differences in amide proton transfer (APT) mean of malignant tumors, normal tissues, and benign tumors, although APT mean could not be used to differentiate between malignant tumor groups. APT imaging has the potential to be of added value to apparent diffusion coefficient in differentiating malignant from benign tumors. 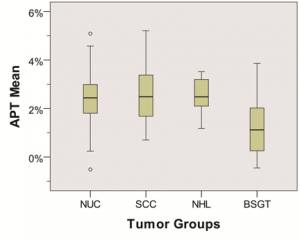 Findings in a 52-year-old man with squamous cell carcinoma of the tongue. (a) Amide proton transfer (APT) map overlaid on MR image with tumor boundary outlined. (b) Histogram of APT values (mean APT, 2.33%).

METHOD: MR images of 189 patients with nasopharyngeal carcinoma confined to the nasopharynx and those of 144 patients with benign hyperplasia were reviewed and compared in this retrospective study. The center, volume, size asymmetry (maximum percentage difference in area between the right and left nasopharyngeal halves), signal intensity asymmetry, deep mucosal white line (greater contrast enhancement along the deep tumor margin), and absence/distortion of the adenoidal septa were evaluated. Differences were assessed with logistic regression and the 2 test.

BACKGROUND: It is important to identify patients with head and neck squamous cell carcinoma (SCC) who fail to respond to chemoradiotherapy so that they can undergo post-treatment salvage surgery while the disease is still operable. This study aimed to determine the diagnostic performance of dynamic contrast enhanced (DCE)-MRI using a pharmacokinetic model for pre-treatment predictive imaging, as well as post-treatment diagnosis, of residual SCC at primary and nodal sites in the head and neck.

METHOD: Forty-nine patients with 83 SCC sites (primary and/or nodal) underwent pre-treatment DCEMRI, and 43 patients underwent post-treatment DCE-MRI, of which 33 SCC sites had a residual mass amenable to analysis. Pre-treatment, post-treatment and % change in the mean Ktrans, kep, ve and AUGC were obtained from SCC sites. Logistic regression was used to correlate DCE parameters at each SCC site with treatment response at the same site, based on clinical outcome at that site at a minimum of two years. 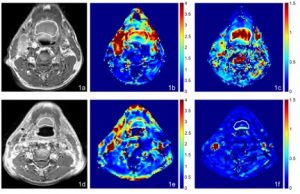 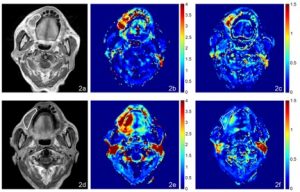 MRI OF DIFFUSE LARGE B-CELL NON-HODGKIN’S LYMPHOMA OF THE HEAD AND NECK: COMPARISON OF WALDEYER’S RING AND SINONASAL LYMPHOMA

AIM: To document the magnetic resonance imaging (MRI) features of diffuse large B-cell lymphoma (DLBCL) in Waldeyer’s ring (WR) and the sinonasal (SN) region, and to identify any differences between lymphatic and extra-lymphatic DLBCLs, and predictors of disease beyond the neck. 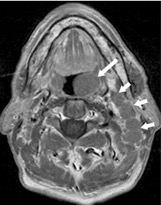 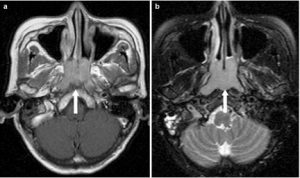 A 63-year-old female with Waldeyer’s ring DLBCL. a Axial T1-weighted image post-contrast and b T2-weighted image with fat saturation showing an exophytic tumour in the nasopharynx (long arrow) with contiguous superficial spread to the nasal cavity but without any deep invasion 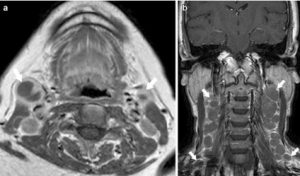 MATERIALS AND METHODS: One hundred fifty-eight patients with pretreatment DWI underwent analysis of the primary tumor to obtain the ADC mean, ADC skewness, ADC kurtosis, volume, and T-stage. Univariate and multivariate analyses using logistic regression were performed to compare the ADC parameters, volume, T-stage, and patient age in primary tumors with local failure and those with local control, by using a minimum of 5-year follow-up to confirm local control.

RESULTS: Local control was achieved in 131/158 (83%) patients (range, 60.3–117.7 months) and local failure occurred in 27/158 (17%) patients (range, 5.2–79.8 months). Compared with tumors with local control, those with local failure showed a significantly lower ADC skewness (ADC values with the greatest frequencies were shifted away from the lower ADC range) (P .006) and lower ADC kurtosis (curve peak broader) (P .024). The ADC skewness remained significant on multivariate analysis (P .044). There was a trend toward higher tumor volumes in local failure, but the volume, together with T-stage and ADC mean, were not significantly different between the 2 groups.

CONCLUSIONS: Pretreatment DWI of primary tumors found that the skewness of the ADC distribution curve was a predictor of local failure in patients with nasopharyngeal carcinoma, based on long-term clinical outcome. 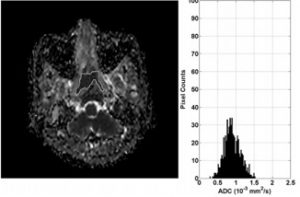 ADC map and histogram of primary NPC before treatment in a 50-year-old woman with local failure. The histogram shows that the greatest frequency of ADC values is shifted toward the central ADC range (ADC skewness 0.11) and the peak is broadened (ADC kurtosis 3.89). 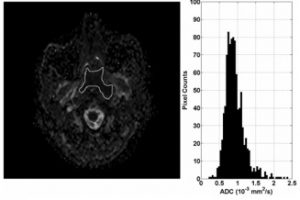 ADC map and histogram of primary NPC before treatment in a 43-year-old man with local control. The histogram shows that the greatest frequency of ADC values is shifted toward the lower ADC range (ADC skewness 1.42) and the peak is more acute (ADC kurtosis 8.77) 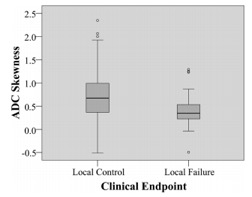